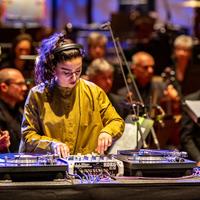 The Music Faculty’s EMPRes group and TORCH have launched Sampling the City; a project that aims to connect different areas of cultural and academic life in Oxford, affording these unique voices and narratives the opportunity to distil into a collaborative work and performance with Shiva Feshareki.

Shiva is an award-winning British-Iranian experimental composer and artist, described as the most “cutting-edge expression of turntablism” and as “One of the most astonishing acts of musical alchemy of the last decade” (BBC Radio 3’s Tom Service). She exists at the intersection of many artistic scenes, experimenting with electronic & club music, concert & orchestral, art & design and free improvisation.

As a composer and artist Shiva uses an array of technology from vintage analogue tape echo, vinyl turntables, CDJs to state-of-the-art 360° ambisonic technology. Her tools also extend beyond electronic technology, using advanced 3D orchestration to score acoustic instruments in spatialized form, for live ensembles and orchestras. Described as “A terrific sonic experience… Among her musical ideas there’s thrash metal and dance music, as well as marvellously fresh-sounding orchestral-gestures, assaulting or beguiling the audience from all angles” (Richard Morrison - Chief music critic of The Times).

This is a research project that looks at exploring the interconnection of sound with physical space through the use of state-of-the-art spatial audio technologies, as well as how sound can be used as an ‘information vessel’ to connect cultures and histories together, in and around the City of Oxford. Through the Visiting Fellowship we aim to investigate the question: How can the Humanities at Oxford nurture and help cross-pollinate cultural communities across the city.

From early conversations with cultural stakeholders within the city, artistic themes have arisen around the perception of the institution; spatial and social barriers in Oxford and related geographic/social isolation of cultural ‘scenes’ in the city. These are the initial themes we are exploring, but we will pursue others as they arise through project development.  The hope is to connect with other community cultural stakeholders and academic colleagues in the hope to obtain different perspectives from the city and explore potential collaboration(s).

The project's final collaborative research output will be disseminated as part of an immersive concert at the Sheldonian Theatre on Friday 25th November 2022.