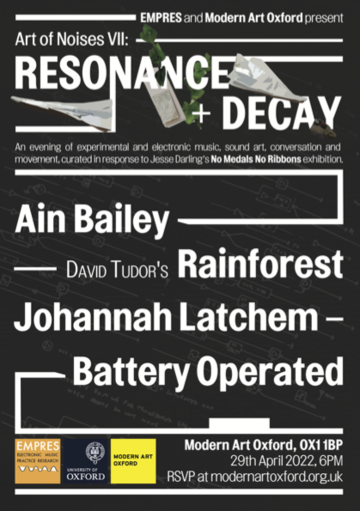 The University of Oxford’s EMPRES group took over the Modern Art Oxford galleries to present an evening of experimental and electronic music, sound art, conversation and movement, curated in response to Jesse Darling’s No Medals, No Ribbons Exhibition.

For AoN VII We featured:

David Tudor’s Rainforest IV (1973) -  an electroacoustic environment conceived by David Tudor and performed by numerous ensembles worldwide since that time. In this performed installation, each composer designs and constructs up to five sculptures, which function as instrumental loudspeakers under their control, and each independently produces sound material to display the sculptures' resonant characteristics.

Instruments, sculpturally constructed from resonant physical materials, are suspended in free space; each instrument is set into sonic vibration through the use of electromagnetic transducers . . . The sound materials used to program the instruments are collected from natural scientific sources and are specific to each instrument, exciting their unique resonant characteristics. The excited resonances are routed to a conventional audio system by the use of one or more pick-ups attached to each instrument. (Original program note, David Tudor papers)

EMPRES installed and performed their interpretation of this piece in the upper gallery, responding to, and interacting with Jesse Darling’s Gravity Road rollercoaster sculpture and the amazing No Medals, No Ribbons exhibition at Modern Art Oxford. We presented Indeterminate electronic and acoustic interplay, resonance, bio-feedback, movement and visual responses in this immersive and interactive performance!

The final piece was developed as an installation running throughout the evening, and three movements for the final performance:

Ain Bailey is a sound artist and DJ. Her practice involves an exploration of sonic autobiographies, architectural acoustics, live performance, as well as collaborations with performance and visual artists. Among these is artist Jimmy Robert, who commissioned Bailey to create a composition for his 2017 show 'European Portraits' at PEER Gallery, London. “Oh Adelaide” (2010), her collaboration with the artist Sonia Boyce, has shown widely, and includes: Tate Britain; the Whitechapel Gallery and The Kitchen, New York. In 2016, Bailey was commissioned by Art Basel Miami Beach to compose for the Soundscape Park. Bailey also devised a Study Week at Wysing Arts Centre, Cambridge, which considered the role of sound in the formation of identity. In addition to this, in 2017, Bailey collaborated with Gaylene Gould on the creation of a Sonic Trail for Tate Britain; London; performed at Guest, Ghost, Host: Machine!, the 2017 Serpentine Marathon. Bailey will present her multi-channel immersive sound work The Pitch Sisters in the basement.

Dr Johannah Latchem is a multimedia artist based in the UK. Her works address themes of law, punishment and power in installations using performance, sculpture, sound, drawing, film, and photography. She is a post-doctoral researcher and resident artist at Oxford University in the Centre for Socio-legal Studies funded by John Fell, and completed her PhD in Fine Art/ Art History at Newcastle University having previously trained at Goldsmiths College University of London and Wimbledon School of Art.

She will present her new work Pig Club (2022) which explores the voices of sex workers in the legal space. Latchem captured her live performance in the basement prison cells of the Clarendon Building in Oxford City centre where sex workers were historically interred awaiting trial.

Battery Operated is an experimental sound and art project with circuit-bending as the main focus. Inside a backyard workshop in a small town in England, they tinker away at any junk they can get our hands on hoping to find an unintended use. 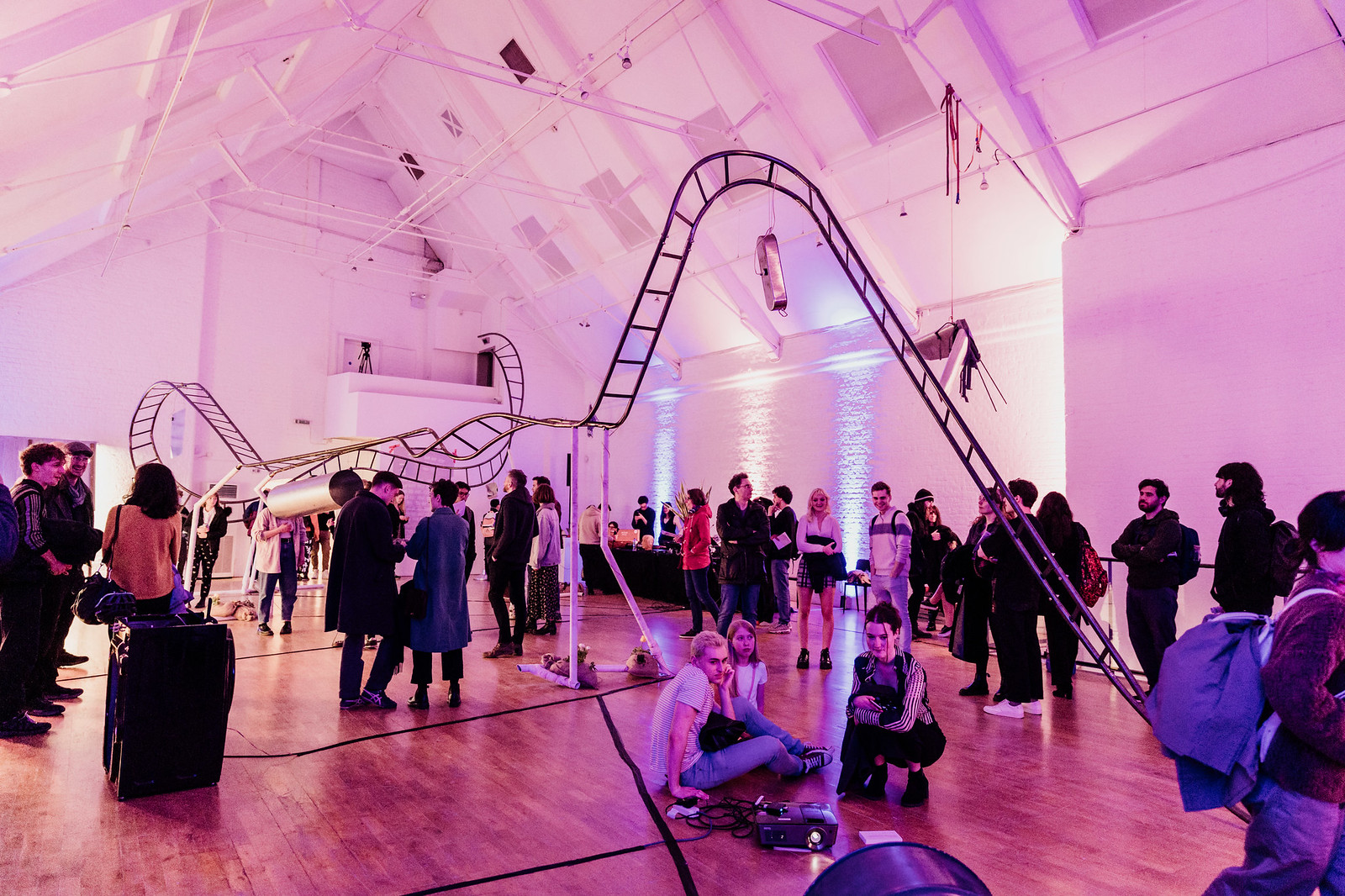