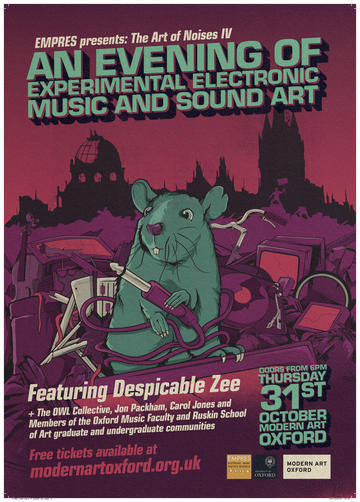 Oxford University’s EMPRES Collective and Modern Art Oxford present another evening exploring the boundaries between music, art and technology in the shape of the Art of Noises series. Taking over the galleries, the evening holds a series of innovative performances and installations.

Oxford-based producer and drummer Zahra Haji Fath Ali Tehrani aka Despicable Zee will perform tracks from her 2019 E.P. Atigheh– عتیقه.  Tehrani describes her writing style as ‘stream of consciousness’, and it’s apparent that this release has been collaged together from many different notes, secrets, scraps and moments in time. Not only through the variety of samples, but also in the content, which poetically relates her father leaving Iran to her own feelings of loss in the present day.

Professor of e-Research at University of Oxford and Fellow of the Alan Turing Institute, David de Roure will present a talk and demonstration on pioneering 19th century computer programmer Ada Lovelace, entitled “numbers into note.” Her intriguing story reveals a brilliant mathematician who recognised even early on that computers might reach into our creative lives and one day generate music.

Members of the The Owl Project will be present to lead a public workshop and performance featuring a specially commissioned loom that is set up to interact and respond to the current MAO exhibition with Kiki Smith: I am a Wanderer.

The evening will see multiple works from the Oxford music and Ruskin school of art graduate and undergraduate community, including DPhil composer Jonathan Packham’s work on the score as space, to be explored by performers. Jon has been commissioned to produce a site specific piece by MAO using VR, that musical performers will respond to in a live performance.