Jon Leidecker aka Wobbly is a San Francisco–based musician/composer of experimental electronic music Member of the multimedia collective Negativland. 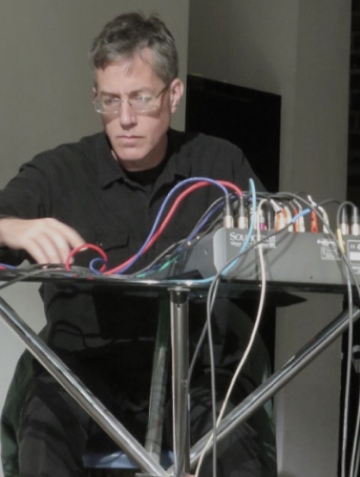 He has been engaged with the medium of electronic music since the mid 1980's, performing in collaboration with others and appearing solo under the unchosen pseudonym 'Wobbly', with an emphasis on live performance and improvisation. Early works utilized sonic collage & musical appropriation, growing out of a series of appearances on Negativland's live-mix radio program Over The Edge -- improvising with recorded sounds to produce music which inherently resists the act of being recorded. Recent work investigates the history and musical aesthetics implied by the physics of acoustic and electrical feedback, research into the technology and creative workflow required for immersive sound diffusion (including five years of work as a member of the engineering team for Dolby's 3D sound format Atmos), and the use of mobile devices and their built-in microphones as cybernetic improvising partners.

In 2008, the Museum of Contemporary Art in Barcelona commissioned the podcast 'Variations', a nine-hour musicological tour through the history of collage & the practice of 'sampling' through the 20th century -- charting how the definition of composition changed, as the site of the 'finished work' migrated from written musical notation to the capturable (and increasingly manipulable) sonic recording.

Variations: A History of Sampling Music

Morton Feldman's remark that "The degree to which a music's notation is responsible for much of the composition itself is one of history's best-kept secrets" referred to the medium of sheet music.  But the comment is just as true now that the site of the musical composition has migrated from written notation to the captured recording.  The creative process of modern music production is revealed to the listening audience in the form of collage and sampling music precisely through its use of familiar materials; through a demonstration of how known compositions and sounds can be transformed, the tools used by all sound engineers to construct modern popular music are made transparent.

Although there is nothing new at all in the practice of using pre-existing musical material as the basis for a new composition, the use of sound recordings challenges the paradigm of the individual creator which was enabled by the advent of written notation.  Sound records provide a more accurate document of communal influences and multiple authorship, leading to a music with a new and audible ideology, which is increasingly in direct conflict with the concept of intellectual property.  Setting examples from both formal art music practioners alongside million-selling popular music experiments with collage from novelty singles to disco and hip-hop, this lecture charts the development of a creative practice which is now so prevalent as to have become nearly invisible, even though its key messages have yet to be widely understood.

Variations podcast complete here (along with my 'Women In Electronic Music 1940-1980' series with Barbara Golden):